Toronto, ON September 28, 2017 – Christian Elia the CCRL’s executive director was presented with the Order of Malta’s Bronze Medal Pro Merito Melitensi in recognition of having conferred honour and prestige on the Sovereign Military Order of Malta (SMOM) through the Hunger Patrol program. 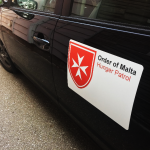 Hunger Patrol was founded by Rev. David Burrows, retired rector of St. Olave’s Anglican Church, who oversaw the program for over 20 years, until his retirement in 2015. Elia and Rev. Burrows became friends during World Youth Day 2002 in Toronto when the Anglican vicar volunteered to host many Catholic WYD pilgrims in Toronto’s west end alongside local Roman Catholic parishes. St. Olave’s continues to be the home of Hunger Patrol and many of it’s parishioners remain active in the program, especially as soup and sandwich makers.

Hunger Patrol involves the coordination of making and delivering  homemade soup each and every Saturday evening to the homeless and poor of the city in three separate locations, outside of an established temporary shelter, outside of a centre for native Canadians, and inside of a permanent low-income housing complex. 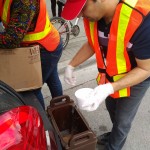 This homemade soup is distributed to dozens of men and women at each of the three locations along with bread and assorted pastries donated by a local bakery.

In addition to the soup and baked goods, dozens of sandwiches are also distributed, made caringly by two separate groups of developmentally disabled adults and adolescents. The Hunger Patrol crew also distributes dozens of brand new socks and underwear each week, purchased in bulk, in addition to donated pants, sweaters, hats, gloves, jackets and anything that might be of use to our friends in need.

The Order of Malta is one of the oldest institutions in Western and Christian civilization, a lay religious order of the Catholic Church since 1113.

If you would like to participate in Hunger Patrol or donate funds or goods, please email Christian Elia at celia@ccrl.ca.

The award was conferred in Rome on June 24, 2017 on the solemnity of Saint John the Baptist, Patron of the Order. The bronze medal Pro Merito Melitensi was presented to Dr. Elia in Ottawa on September 9.