Prolife, ALL IN: The CCRL supports the March for Life

Ottawa, ON May 10, 2018 – The Catholic Civil Rights League (CCRL) is pleased to extend its continued support for the national March for Life taking place in Ottawa today with representation from across the country. The theme for this year’s march is Prolife, ALL IN.

CCRL Director from the National Capital Region Richard Bastien participated in EWTN’s live coverage from Parliament Hill. The League’s Ontario Director Tanya Granic Allen was also in Ottawa for the March for Life. We thank Patrick Craine and our friends at LifeSiteNews for the photograph. 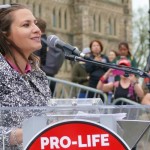 Thousands of  people assembled on Parliament Hill and marched peacefully through downtown Ottawa despite efforts from a radical pro-abortion group to block the march.