Life – We Stand on Guard for Thee: The CCRL supports the March for Life

Ottawa, ON May 11, 2017 – The Catholic Civil Rights League (CCRL) is pleased to extend its continued support for the national March for Life taking place in Ottawa today with representation from across the country. The theme for this year’s march is Life – We Stand on Guard for Thee.

As in previous years, the CCRL’s executive director, Christian Elia, is present in Ottawa supporting the cause with media work,  advertising support, and a financial donation on behalf of the CCRL. Dr. Elia participated in EWTN’s live coverage from Parliament Hill. Two of the CCRL’s directors were also in Ottawa for the March for Life. We thank director and seminarian Alexander (Sandy) MacDonald for representing Atlantic Canada and from Ontario, Tanya Granic Allen, pictured below with Elia. 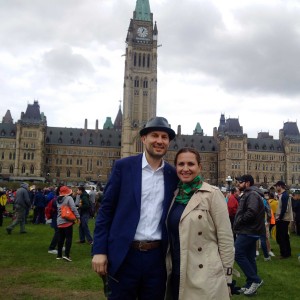 Despite the cold weather and the threat of rain, over 15,000 people assembled on Parliament Hill and marched through downtown Ottawa.