TORONTO, ON June 3, 2011 (CCRL) – Some of the religious freedom and parental rights matters in which CCRL is involved have parallels in American history, Donald DeMarco told those attending the League’s annual dinner in Toronto June 2.

Noting that the Ku Klux Klan influenced legislation designed to prohibit all schooling outside the public system in Oregon in the 1920s, Dr. DeMarco, professor emeritus at St. Jerome’s University and Adjunct Professor at Holy Apostles College & Seminary (in Cromwell, CT) and at Mater Ecclesiae College (in Greenville, RI), described how the Society of Sisters of the Holy Names of Jesus and Mary brought a court case against the legislation and won. (The order was founded by Blessed Eulalie Durocher in Quebec in 1843, and was later invited to teach in Oregon by the local bishop.)

“In the early 1920’s, Oregon was the home to approximately 14,000 members of the Ku Klux Klan, including the mayor of Portland, many politicians, and police officers.  They regarded themselves as “real” Americans and felt duty bound to target the Catholic Church, the largest provider of private education.  Fiery crosses and marches in Ku Klux Klan regalia were common sights in Oregon at that time.  Thus began a heated clash between a form of nationalism, as narrowly conceived by the Klan, and religious pluralism that seemed protected by the United Stated Constitution…

“The Klan also played a significant role in getting The Oregon Compulsory Education Act passed in 1922.  The Act would compel all children between the ages of eight and sixteen to attend public schools.  If implemented, it would mean the dissolution of all Catholic schools in the state of Oregon, along with all other private schools.  The Sisters, who, at that time, operated many schools in Oregon, did not sit idly by.  They sued and the case was heard by the United States Supreme Court.”

Representatives for the state of Oregon (the “appellants”) argued that the state had an over- riding interest to oversee and control the providers of education.  Accordingly, they claimed that the state’s interest in overseeing the education of its citizens was so great that it overrode the parents’ right to choose which provider of education was best for their children.  It was even argued that Oregon children are “the State’s children”.

By contrast, the “appellees” replied that the state did not have a right to absolute control over the system in which a child should be educated, and that parents have a right to send their children to schools of their choice, including religious schools.  There was nothing in the records to indicate that the Catholic schools had failed to discharge their obligations to patrons, students, and the State.

“After deliberating for 10 weeks, the Court issued its unanimous decision on June 1, 1925.  In overturning the Oregon statute, the Court stated as follows:  “The fundamental theory of liberty upon which all governments in this Union repose excludes any general power of the state to standardize its children by forcing them to accept instruction from public teachers only.  The child is not the mere creature of the state;  those who nurture him and direct his destiny have the right, coupled with the high duty, to recognize and prepare him for additional obligations.”

There are many parallels between this case and some of the current cases in which the League is involved, such as the Quebec schools case and conflict over equity and inclusiveness policies in other provinces, which hinge on the rights of parents to direct their children’s education.

Dr. DeMarco commented that Supreme Court decisions that supported abortion, ironically, cited the Pierce v. Society of Sisters decision. “But this enlargement of the freedom of the parents resulted in the displacement of justice for the unborn.  What we need today is the kind of wisdom the Canadian Catholic Civil Rights League is witnessing, namely, one that preserves the proper balance between freedom and justice.”

The Archbishop Exner Award for Catholic Excellence in Public Life was presented to author and broadcaster Michael Coren, whose recent book “Why Catholics are Right” is on Canadian bestseller lists. He is a popular columnist, appearing regularly in the Toronto, Ottawa, Calgary, Edmonton and Winnipeg Sun and The London Free Press and in more than a dozen other daily and weekly newspapers across Canada. He is also a columnist for Women’s Post, The Catholic Register, The Landowner and The Interim. 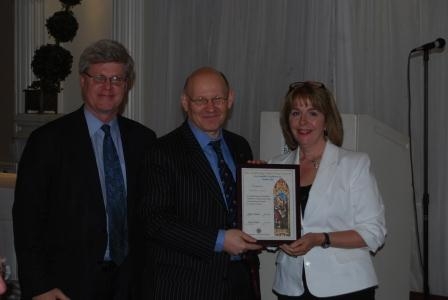 League President Philip Horgan said, “Through his prominent defense of Catholic teaching in his writing and broadcasting, Michael has provided strong correction to the myths that many continue to believe about our faith, and also to the bias that we often see in media coverage of faith-based issues. “It’s a pleasure to recognize Michael’s work in the media and how much it has helped promote better understanding of Catholicism.”

Mr. Coren said he was delighted and honoured to receive the award.

League President Phil Horgan summarized some recent endeavours of the League, including our appearance at the Supreme Court of Canada in the Quebec Schools case, a successful challenge to the Advertising Standards Council of Canada of offensive billboard advertising, and our intervention in the appeal of a court ruling that would completely decriminalize all aspects of prostitution.

The League established the Archbishop Exner Award in 2004 to honour Archbishop Adam Exner, OMI, Archbishop Emeritus of Vancouver, upon his retirement and to recognize outstanding lay achievement in advocacy, education, life issues and philanthropy. Previous recipients include:

* Suzanne LaVallee of  Quebec for leadership in education
* Frank Chauvin of Windsor, Ontario, founder of Haiti’s first orphanage for girls and initiator of an application for review of the process by which Henry Morgentaler was awarded the Order of Canada
* Dr. and Mrs. Andrew and Joan Simone of Toronto, co-founders of Canadian Food for Children, for services to philanthropy and international aid
*Campaign Life Coalition President Jim Hughes of Toronto for service to the pro-life movement
* J. Fraser Field of Vancouver, founder of Catholic Educators’ Resource Centre, for service to education
* The late Regina business leader Frederick W. Hill for philanthropy and community service.