TORONTO ON June 8, 2012 – The League honoured artist, author and Catholic thinker Michael O’Brien with this year’s Archbishop Adam Exner Award for Catholic Excellence in Public Life at its annual dinner in Toronto June 7. After Mr. O’Brien was presented with his award, he briefly presented some reflections about faith and the cultural battle against Christianity. He said that all his work has been an attempt to show the eternal beauty of every human being and the true story of man. He reminded us that we cannot forget our Christian faith narrative otherwise we risk forgetting our conception of who we truly are.  In so doing, our forgetfulness will be our ruin. Souls are being lost because of a toxic culture that hides people’s true identity and calling.

“The world needs the Catholic voice, founded on Jesus our spiritual rock, to defend, to nourish and make possible the future of mankind,” said Mr. O’Brien. “We must always remember that God is our Father and grieves over abortion, euthanasia and all sins against life. We must be the voice and witness to His truth, to His love and to His grace.”  A standing ovation followed. 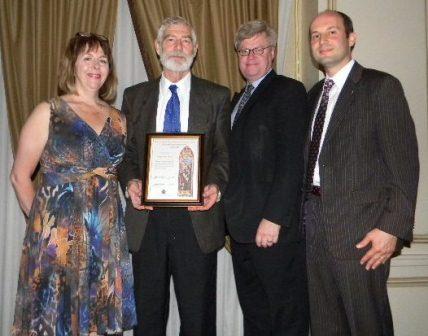 Born in Ottawa in 1948, Michael O’Brien is known the world over for his novel Father Elijah: An Apocalypse. His most recent book is Father at Night. His non-fiction books include:  A Landscape with Dragons: The Battle for your Child’s Mind, and Harry Potter and the Paganization of Culture. Mr. O’Brien is also an internationally renowned artist. His works are found in many places including churches and monasteries all over North America, Europe, Africa and Australia. Many of his books have been bestsellers in the Catholic and secular world and have been translated into many languages. He is married to Sheila and they have six children. For more information, visit his website at studiObrien.com.

League President Philip Horgan had this to say about Mr. O’Brien, “Through his ability to engage strong Catholic themes in his writings and the unique religious imagery in his paintings, Michael has given a powerful witness in the world of art and literature, and his work has given spiritual enrichment to countless individuals.  It is an honour to recognize Michael’s work and give our supporters an opportunity to meet him.”

The keynote address was delivered by Professor Robert Ventresca, chair of the History Department at King’s University College, London, Ontario and author of a soon-to-be released biography on Pope Pius XII. His talk centred on how the Catholic faith is often poorly portrayed in the public square and the media. Professor Ventresca stressed the importance of learning to distinguish myth from facts in order to get the most accurate view possible of Church and other aspects of cultural history. Facts and religion do and must go together.

He used the conflicting historical views of Pope Pius the XII regarding his efforts to fight Nazism and save the Jews and others both in Italy and the rest of the world. An example of Catholic myth making at the expense of truth can be found, according to Dr. Ventresca, in John Cornwell book, Hitler’s Pope. In order to present Catholicism in its proper light, the historian and others need to discern the true facts behind cultural mythology, debunk the falsehoods and reveal the truth.  The complexity and nuance surrounding historical facts are too often reduced to caricature or falsehood.

The League has presented the Archbishop Exner award annually since 2004 to recognize outstanding lay achievement in areas including education, philanthropy, media and culture and community service. Past recipients include Toronto’s Michael Coren, author and broadcaster, for his very public defence of Catholicism; Suzanne LaVallee of Quebec for her leadership in education; Frank Chauvin of Windsor, Ontario, founder of Haiti’s first orphanage for girls and for initiating the review process of the Order of Canada after it was given to Henry Morgentaler, and Dr. Andrew and Mrs. Joan Simone of Toronto, co-founders of the Canadian Food for Children, for services to philanthropy and international aid.

The evening began with a tribute to Tom Langan, League co-founder, past president and president emeritus, who died May 25. League President Phil Horgan shared some fond memories of joining the League under Tom’s encouragement and how we have all tried to remain true to his vision. Mr. Horgan also announced that CCRL will be compiling a book of Tom’s writing, focusing on work he did for the League, as its lasting tribute.

We would particularly like to thank our generous donors who made it possible for students to attend the dinner on a pay-what-you-can basis.

– For Michael O’Brien, faith is life. Catholic Register, May 31