Noting that the media has grown rapidly and embraced new technologies in the past 25 years, Father de Souza said that while there are better sources for news and commentary about the Church available now, there is also greater potential for bias and falsehood to spread in an instant. 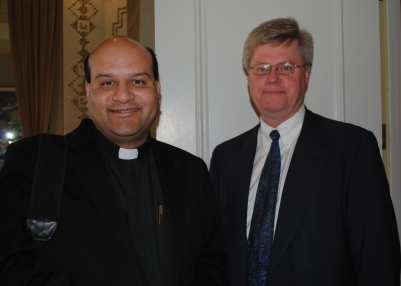 “The League began in 1985, a time of renewed confidence for the Church. The synod that year celebrated and gave fresh impetus to the achievements of the Second Vatican Council. It was a good time for harnessing that confident spirit and creating a force for challenging media bias and participating in debates on public policy,” said Father de Souza, National Post columnist, Chaplain, Newman House and adjunct faculty at Queen’s University.

Some of the fights in which the League has been involved, such as the change to the definition of marriage, complete legalization of abortion and proposals to liberalize euthanasia, were barely on the horizon when the League was formed, Father de Souza said. The League has become a respected force in these debates, he added, and as an independent lay organization has more freedom than the Church hierarchy to participate in issues that sometimes have political overtones.

“One of the good things about a silver anniversary is that many of the founders are still part of the League. They deserve our thanks and congratulations for seeing a problem and doing something about it. Theirs is a real achievement.”

Greetings were read from the League’s chaplain, Archbishop Adam Exner, O.M.I., retired archbishop of Vancouver. “The League has made and is making a significant difference in upholding and protecting our faith and morals which constantly seem to be under attack. The need for the League is not likely to diminish. As we look to the future, I pray that the League will forge ahead with renewed energy and will strive to bring about the new springtime of faith and Christian living that Pope John Paul II hoped and prayed for at the beginning of the new millennium.”

Certificates of honour were presented to League co-founders Keith Cassidy, Rev. Alphonse De Valk, C.S.B., David Dooley and Tom Langan, president emeritus. Their achievements, and those of many others who have been active in the League over the years, were celebrated in a message by President Phil Horgan. Noting that the earliest battles of the League involved newspaper attacks on Catholicism related to the abortion debate, Mr. Horgan noted that the League continues to combat attacks on faith based on the Church’s moral teaching.

“There is a strong belief in many quarters that people of faith should not participate in public debate,” Mr. Horgan added. “We owe a debt to the League’s founders for providing a vehicle for countering that sentiment.”