Toronto, ON May 5, 2017 – The Catholic Civil Rights League (CCRL) is pleased to announce that it has chosen founder of MaterCare International, Dr. Robert Walley as winner of this year’s Archbishop Adam Exner Award for Catholic Excellence in Public Life. The award will be presented at the CCRL’s annual Spring Dinner on June 19 in Toronto at 6:30 pm at the Sala Caboto Ballroom at 40 Playfair Ave, west of Dufferin, south of Lawrence, featuring a keynote address by Dr. Andrew Bennett, Canada’s first Ambassador for Religious Freedom and Head of the Office of Religious Freedom from 2013 to 2016.

In the many years of the work of MaterCare International, Dr. Robert Walley has been a shining light, and a true ambassador for Christ and His Church. MaterCare International has developed maternal and infant care projects in numerous developing nations, building hospitals and maternal care centres. The work has provided valuable and essential on the ground training for pregnant mothers and caregivers with assistance in high risk pregnancies. Matercare’s work has resulted in remarkable success in the reduction of maternal and infant mortality.

At a time when Canada’s foreign policy has deviated from this important international work, we are proud to recognize one of Canada’s truly remarkable public outreach exports, so perfectly exemplified in the work of Dr. Robert Walley, with the support of his wife, Susan, and his beautiful family. He is a true inspiration to us all!

I will be most honoured to receive the Archbishop Adam Exner Award but do so on behalf of all those associated with the work for the Church done by MaterCare International. I will also be most happy to join the previous distinguished recipients.

Dr. Robert Walley was in born in Malta of British military parents and was educated in London England by the Missionary Sisters of the Sacred Heart of Jesus (Cabrini Sisters) and by the De La Salle Brothers, and also in Pune, India for two years.

In 1985 Dr. Walley was appointed as a Consultor to the Pontifical Council for Health Pastoral Care by Pope John Paul II and served on the Council until 2002. Dr. Walley founded MaterCare International in 1997. 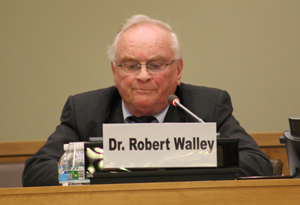 Dr. Walley has had a particular concern for the unacceptable levels of maternal and perinatal mortality and of obstetric and gynecological fistulae and the failure of the International Safe Motherhood initiative. His firsthand experience in western Africa, beginning in 1981, prompted him to initiate the formation of MaterCare International. This non-governmental organization is interdisciplinary and made up of obstetricians, gynecologists, midwives, bioethicists, administrators and many supporters around the world. MaterCare International is dedicated to improving maternal health care worldwide through new initiatives of service, training, research and advocacy based on the ethic that all mothers and babies matter.

Dr. Walley has been invited to testify at hearings, at the Foreign Affairs Sub-Committee on Africa and Global Health of the US Congress, the Polish Parliament (the Sejm), the United Nations, to members of the Canadian and European Parliaments, the Republic of Georgia, the NGO Forum of the Holy See and most recently prior to the 2010 G8/G20 he was asked to meet with the Prime Minister’s senior policy advisor regarding the Canadian Government’s initiative to reduce maternal mortality and MaterCare International projects in Sub-Saharan Africa.

Dr. Walley has published on obstetrical and gynecological practice, conducted research into the treatment of post-partum hemorrhage in developing countries, produced educational training CDs on obstetric fistula and other public information videos on maternal health in developing countries. He has lectured widely internationally and participated in many media interviews.

Dr. Walley has received many awards for his work. On December 9, 2012, he was presented with the award Pro Ecclesia et Pontifice by the Archbishop of St. John’s on behalf of Pope Benedict XVI. This is the highest award given to a lay Catholic. On September 20, 2014, he was admitted to the Award of Honorary Doctor of Philosophy by the John Paul II Institute for Marriage and Family, Melbourne, Australia.

Dr. Walley has been married to Susan Mary, a nurse from Guernsey, Channel Islands, and they will celebrate their 51st wedding anniversary on June 30, 2017. They have seven children and 13 grandchildren. They have lived in St John’s, Newfoundland since 1973.

The CCRL established the Archbishop Exner Award in 2004 to honour Archbishop Adam Exner, OMI, Archbishop Emeritus of Vancouver, upon his retirement and to recognize outstanding achievement in advocacy, education, life issues, media and culture, and philanthropy. Previous recipients include:

Michael Coren, author and broadcaster, for his outspoken defense of Catholicism in media (2011)