TORONTO, May 31, 2013 – The Catholic Civil Rights League hosted its annual dinner in Toronto May 30. The event featured the presentation of the Archbishop Adam Exner Award for Catholic Excellence in Public Life to Father Alphonse de Valk, CSB, and a keynote address by Stephen Woodworth, MP for Kitchener Centre.

Father de Valk, who was chosen for the award for his contributions to pro-life advocacy and writing, co-founded the Catholic Civil Rights League in 1985, and the Ontario Family Coalition Party in 1987.

The long-time editor of Catholic Insight, Father de Valk founded the magazine in 1993 with a special mission to inform, catechize and strengthen faithful Catholics to engage with the culture. He recognized that the intellectual, social and moral underpinnings of the culture of death were interconnected, with a seamless nexus between contraception, abortion, euthanasia and homosexuality. In 2006 he became part of the war against the excesses of human rights commissions when he was charged with hate speech by the Canadian Human Rights Commission, based on a complaint from an Edmonton activist about some writings critical of homosexual conduct, written during the debates about changing the definition of marriage. He was acquitted in 2009 but only after incurring significant legal expense.

He went to work full time for Campaign Life Coalition in Toronto in 1984, and was editor of The Interim from 1987 to 1992.  In October, 1985 he spent a night in the Toronto (Don) Jail for chaining himself to the gate of the Morgentaler Clinic. He continued to protest once a week for almost five years. In 1989 he was arrested nine times and charged with trespassing for violating the injunction against protesting outside the Morgentaler facility, eventually being fined $750 or two weeks in jail. Since then he has stopped witnessing at the site, but has not paid the fine or gone to jail. 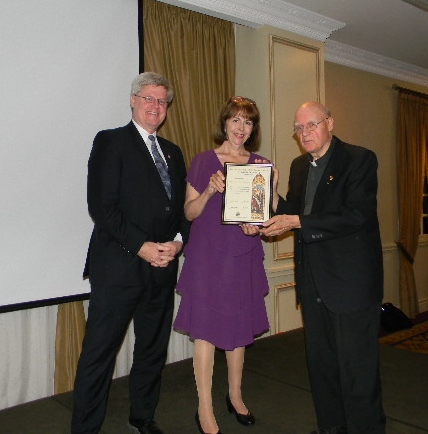 Father de Valk  (pictured, with Phil Horgan and Joanne McGarry) told the dinner attendees that some of the early work of Catholic Insight in the 90s focused on the liberalization of attitudes toward homosexuality, particularly in schools, and noted that many of the predictions came through in the recent Whatcott decision by the Supreme Court of Canada. “By failing to acknowledge a difference in law between criticizing the behaviour as opposed to the person, the decision has a chilling effect on free speech and open dialogue. “ He added that much of the battleground has now shifted to schools, noting that we need good trustees to uphold the religious rights of Catholic Schools.

His acquittal on hate speech charges in 2009 was based in part on a finding that the writings were commentary on public policy, not hatred.

Father de Valk, who co-founded the League in 1985, also said he is enjoying his retirement at the Henry Carr Farm in Beeton, where he now resides.

Guest speaker Stephen Woodworth (MP-Kitchener Centre) discussed Motion 312, a private members’ bill he proposed last year. The Motion called for a parliamentary study that would call on expert evidence to determine whether Canada’s current definition of when a child becomes a human being is in keeping with modern scientific evidence.  (The definition, that a child is a human being for legal purposes after it has completely exited the mother’s body in a living state, is contained in criminal code subsection 223(1) and is based on 400-year old common law).

“The sweep of history for 400 years has been the ever-greater recognition of the inherent worth and dignity of every human being. That bedrock foundation anchors Canada’s essential character.

“Motion 312 was not really about abortion at all, but about basic human rights,” said Mr. Woodworth. “It was about enshrining in Canadian law the equal and inherent dignity and worth of every human being.  All laws must be honest; in this case, our current definition of when a child becomes human is at odds with what the great majority of Canadians understands and believes. ”

This is not “just a religious thing”, as opponents like to maintain, he said. “This is a moral issue, not a confessional or sectarian one.”

The motion, which was defeated in September, 2012 by a vote of 203 to 91, also was in keeping with a comment Justice Bertha Wilson made in her decision in R vs. Morgentaler, when she noted that parliament was free to propose new abortion legislation and could consider calling on medical, ethical and other experts to consider evidence on when life begins.  “It was not a radical proposal. But abortion proponents behave as though as spell has been cast every time anything remotely connected to abortion comes forward, and oppose it out of hand. This happened with Mark Warawa’s proposal on gender-selective abortion as well as Rod Bruinooge’s proposal to ban coercion in abortion.”

History is on the side of justice and basic human rights, Mr. Woodworth said. “I believe science and medicine will bring Canadian law into the 21st century.” In the meantime, it’s important to become politically engaged. “Join a political party to do the persuading and the relationship building, to convince MPs and other party members to listen on human rights and democratic values.