The CCRL Presents the Exner Award to Alex Schadenberg at its 2016 Spring Dinner, Hears Address by Douglas Farrow

Toronto, ON June 9, 2016 – On June 2, the CCRL hosted its annual dinner in Toronto. This year the keynote speaker was Douglas Farrow, Professor of Christian Thought at McGill University, holder of the Kennedy Smith Chair in Catholic Studies, and Project Director for Pluralism, Religion and Public Policy. He spoke about the concept of autonomy and autonomy and dignity as understood by society, reflected in the Supreme Court of Canada’s Carter decision and Parliament’s response in Bill C-14.

For the state today does not acknowledge that there is any higher form of law than its own law. It regards it a duty of its secularity that it should make no such acknowledgment. Conscience-and-religion claims have thus receded into the realm of the non-rational. They are not perspicuous to public reason, and can be accessed legally only by a sincerity test; that is, they permit only a subjective judgment as to whether they are deeply and sincerely held. Conscience and religion claims, at bottom, are just a subset of autonomy-and-dignity claims. Voices are now raised asking whether they add anything specific or particularly useful, or should be de-listed.

Otherwise put, one can no longer appeal to the fundamental demands of morality, for the state does not know what to do with moral questions. It knows only choices, choices that rest on the freedom of indifference. The choice for suicide stands on level ground with the choice against suicide.

The League presented the Archbishop Adam Exner Award for Catholic Excellence in Public Life to anti-euthanasia/assisted suicide activist Alex Schadenberg.  He has been the Executive Director of the Euthanasia Prevention Coalition (EPC) since July 1999 and the Chair of EPC – International since November 2007. Schadenberg, who was accompanied by his wife and six children, spoke about the history of the EPC and the fight against euthanasia and assisted suicide in Canada. 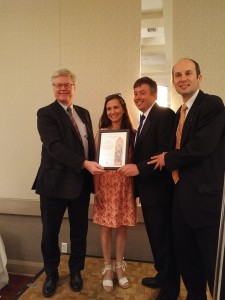 For more on the CCRL’s Spring Dinner 2016, please see:

For the Catholic Register’s article on Alex Schadenberg and the Exner Award please see:

For the world’s most widely read blog on issues related to euthanasia and assisted suicide, please visit:

For more from Prof. Farrow on euthanasia and assisted suicide, please see: