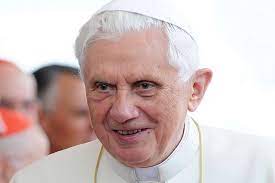 We have been blessed and are incredibly grateful to have had the guidance from Pope Benedict XVI to assist and sustain us with the fullness of Catholic teachings in matters of public importance in Canada and the world.  We can find numerous references in his words where he brought Christ and the theology of the Church to the public square, against the onslaught of efforts to remove positions of faith from public engagement.

Founded in 1985, the CCRL has had as its mission and mandate the responsibility to inform public policy and public opinion in the light of religious faith and reason. We, as citizens in a pluralist society, strive to promote the search for truth through sound education, open communication, and respectful dialogue. As Catholics, we believe that the right to religious freedom has its foundation in the dignity of the human person, which is known through the revealed Word of God and by reason itself.

Pope Benedict XVI was a major theologian, and a great teacher.  His many writings bear witness to his special gifts. There are two occasions in particular that Pope Benedict XVI inspired us in our mission and mandate.

The homily of then Joseph Cardinal Ratzinger at the opening Mass of the conclave on April 18, 2005, that would conclude with him being elected the 265th pope. It was here that he identified the “dictatorship of relativism” with which we have struggled:

How many winds of doctrine we have known in recent decades, how many ideological currents, how many ways of thinking. … The small boat of thought of many Christians has often been tossed about by these waves — thrown from one extreme to the other: from Marxism to liberalism, even to libertinism; from collectivism to radical individualism; from atheism to a vague religious mysticism; from agnosticism to syncretism, and so forth. Every day new sects are created and what St. Paul says about human trickery comes true, with cunning which tries to draw people into error (cf. Eph 4:14). Having a clear faith, based on the creed of the church, is often labeled today as a fundamentalism. Whereas relativism, which is letting oneself be tossed and “swept along by every wind of teaching,” looks like the only attitude (acceptable) to today’s standards. We are moving toward a dictatorship of relativism which does not recognize anything as for certain and which has as its highest goal one’s own ego and one’s own desires.

Like the great shepherd that he was, he provided us with the answer found in a mature adult faith centered on Jesus Christ:

However, we have a different goal: the Son of God, true man. He is the measure of true humanism. Being an “adult” means having a faith which does not follow the waves of today’s fashions or the latest novelties. A faith which is deeply rooted in friendship with Christ is adult and mature. It is this friendship which opens us up to all that is good and gives us the knowledge to judge true from false and deceit from truth. We must become mature in this adult faith; we must guide the flock of Christ to this faith. And it is this faith — only faith — which creates unity and takes form in love. On this theme, St. Paul offers us some beautiful words — in contrast to the continual ups and downs of those who are like infants, tossed about by the waves: (He says) make truth in love, as the basic formula of Christian existence. In Christ, truth and love coincide. To the extent that we draw near to Christ, in our own life, truth and love merge. Love without truth would be blind; truth without love would be like “a resounding gong or a clashing cymbal” (1 Cor 13:1).

Five years later at Westminster Hall, Pope Benedict XVI addressed representatives of British society, including the diplomatic corps, politicians, academics, and business leaders. He spoke of the necessity for the complimentary roles of religion and politics in a mature democracy, one for which the CCRL advocates:

The central question at issue, then, is this: where is the ethical foundation for political choices to be found? The Catholic tradition maintains that the objective norms governing right action are accessible to reason, prescinding from the content of revelation. According to this understanding, the role of religion in political debate is not so much to supply these norms, as if they could not be known by non-believers – still less to propose concrete political solutions, which would lie altogether outside the competence of religion – but rather to help purify and shed light upon the application of reason to the discovery of objective moral principles. This “corrective” role of religion vis-à-vis reason is not always welcomed, though, partly because distorted forms of religion, such as sectarianism and fundamentalism, can be seen to create serious social problems themselves. And in their turn, these distortions of religion arise when insufficient attention is given to the purifying and structuring role of reason within religion. It is a two-way process. Without the corrective supplied by religion, though, reason too can fall prey to distortions, as when it is manipulated by ideology, or applied in a partial way that fails to take full account of the dignity of the human person. Such misuse of reason, after all, was what gave rise to the slave trade in the first place and to many other social evils, not least the totalitarian ideologies of the twentieth century. This is why I would suggest that the world of reason and the world of faith – the world of secular rationality and the world of religious belief – need one another and should not be afraid to enter into a profound and ongoing dialogue, for the good of our civilization.

Religion, in other words, is not a problem for legislators to solve, but a vital contributor to the national conversation. In this light, I cannot but voice my concern at the increasing marginalization of religion, particularly of Christianity, that is taking place in some quarters, even in nations which place a great emphasis on tolerance. There are those who would advocate that the voice of religion be silenced, or at least relegated to the purely private sphere. There are those who argue that the public celebration of festivals such as Christmas should be discouraged, in the questionable belief that it might somehow offend those of other religions or none. And there are those who argue – paradoxically with the intention of eliminating discrimination – that Christians in public roles should be required at times to act against their conscience. These are worrying signs of a failure to appreciate not only the rights of believers to freedom of conscience and freedom of religion, but also the legitimate role of religion in the public square. I would invite all of you, therefore, within your respective spheres of influence, to seek ways of promoting and encouraging dialogue between faith and reason at every level of national life.

Much more can be said of Pope Emeritus Benedict XVI, but his death may provide an opportunity for observers to take a moment to read his words, whether from his many books, such as his Introduction to Christianity, or his three-part series on Jesus of Nazareth, or from the many encyclicals and interviews.

May our former Supreme Pontiff find peace and rest in the comfort of the promises of Christ.  May we be inspired to find our own friendship with Christ, as Pope Emeritus Benedict encouraged.