The Lion of Münster: The Bishop Who Roared Against the Nazis

This talk was delivered on November 23, 2016 at the Church of the Holy Family in Toronto, which is the seat of the Oratorian Fathers of Saint Philip Neri. The occasion was the launch of a new book, “The Lion of Münster: The Bishop Who Roared Against the Nazis,” by Fr. Dan Utrecht of the Oratory. 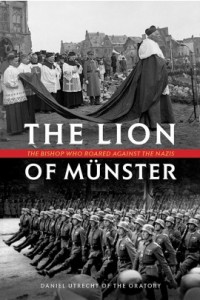 I’m very honored to be asked to say a few words tonight. Not just because I know author Fr. Dan Utrecht and I’m a parishioner here but also because I have always had a deep admiration for those Germans who refused to buckle under the mass hysteria of those times, especially from 1933 when Hitler came to power until May 1945, when the war ended and Nazism was defeated.

I will never be able to fully comprehend how much courage it took to speak out against one of the most ruthless regimes in modern history.

One of those Germans, Bishop of Münster Clemens August Graf von Galen, we are celebrating tonight, thanks to the great work of our brother Fr. Dan.

Those who refused to go along with the Nazis, who dared to speak out, were few. To go along was relatively easy. March with the others, say the Heil Hitler with a bit of enthusiasm and for the rest, including pretending your good Jewish neighbor of many years was not really being hauled away, would allow you a form of peace or at least safety. I say this not with contempt. Not only did you risk your own freedom and even your own life for objecting, but the Nazis made sure that dissenters knew their families would also suffer terribly.

For devout Christians, who believed in the Truth of Christ, the torment of the times was even more horrific as they knew they were becoming an ever-smaller, irrelevant minority. Even clinging to basic human decency, was to enter a most frightening place – especially if one decided to speak out or write about their views.

That is why the names of those who refused to stand by, still shine so brightly, for they were beacons lit by the grace of God while the world around them fell into the pitch black of unmitigated evil.

I am sure Blessed Clemens would not mind being mentioned among some of those other Germans whose public acts of defiance, and just simple decency, led to their deaths: The White Rose, young students from Munich who were executed for their anti-Nazi beliefs, including Sophie Scholl and her brother, Hans. There was the Protestant Pastor Dietrich Bonhoeffer, Fr Alfred Delp, who also railed against euthanasia, and the lesser-known Franz Jagerstatter, an ordinary man who refused to put on the military uniform of a godless state and paid the ultimate price. He was declared a martyr.

It’s worth remembering, even briefly, what happened during the time of the Nazis. We all know about the camps and the catastrophic loss of life both military and civilian. These things did not come out of thin air. Rather, it started when men decided they could replace God or that their perverted ideas made them into a kind of false prophet.

Human life was valued on a person’s utility. The idea of all of us being respected as children of God, worthy of love and respect, regardless of one’s physical or mental state or age, was an idea that offended the Nazi agenda. It was a sign of weakness and weakness was considered a stumbling block to world domination and extermination. I’m not sure how those who continued to pretend to be true Christians, while being in step with Nazi marching songs, ever read the Sermon on the Mount without feeling profound shame.

Those considered unfit to contribute to the national program were called Useless Eaters, probably one of the ugliest terms ever invented but effective when the Nazis were pushing their euthanasia program — which you will learn more about by reading this important book being launched tonight.

The Nazis came up with insane racial theories in which there was a master race and subhumans. These untermenschen were not considered actually human. They were biological mistakes something like lab rats or beasts of burden: subjecting these subhumans to every form of degradation, to torture, to medical experiments or simply being worked to death was legal and desirable.

Those who were opposed to the Nazis were almost all Christians. What they all understood was that Hitler was a pagan and Germany was destroying itself on his behalf. God was being blotted by men in brown and black shirts with thumping boots who gave full rein to their worst impulses.

The Nazis believed that Christianity was at its root a Jewish, decadent religion and that Jesus was a Jew and anything Jewish was corrupt. Christianity was unmanly. It felt too much. It cared too much for those in need. It contained compassion – the last thing the Nazis needed to carry out their goals.

How can someone euthanize a child because they are not perfect when they feel compassion? Better those pagans, not bogged down by Christian love, to do the job.

They saw Christians as members of a degenerate faith that put its stock in an invisible God rather than the power of the state. There was even an attempt to form a German National Church. It got rid of the Old Testament, too Jewish, and erased all signs of Judaism from the new, except as the killers of Christ. Their Christ was a blonde Aryan god sent to destroy the Jews.

But true Christians never lost sight that what was happening around them was the corruption of all that was good. Somehow they never forgot that truth is eternal and would one day outlast the horrors around them. Even to have that kind of faith in those times was miraculous.

This past August 3rd , marked the 75th anniversary of when Blessed Clemens condemned from his Cathedral’s pulpit the Nazi euthanasia program:

If you establish and apply the principle that you can ‘kill’ unproductive human beings, then woe betide us all when we become old and frail! . . . Do you, do I have the right to live only as long as we are productive?. . . .Nobody would be safe anymore. Who could trust his physician? It is inconceivable what depraved conduct, what suspicion could enter family life if this terrible doctrine is tolerated, adopted, carried out.

He also said “The dear God placed me in a position in which I had a duty to call black ‘black’ and white ‘white’.”

In speaking out he risked death. One Gestapo leader wanted him hanged. Other Nazi leaders, fearing his popularity, said wait till we have won the war.

He also spoke out against racial programs — something else that angered the Nazis and drove them to homicidal anger.

You should not only buy this book because our brother Fr. Dan wrote it, but because we all need men like Blessed Clemens in our heart and in our lives. He and others like him are whom we should turn to when we fear the mockery of secular society because we stand up for life.

We have nothing to be afraid of. No one will hurt us. We have each other. We have our faith. We have our parishes. We still live in a democracy.

The next time you feel constrained to speak the truth about euthanasia or abortion or the awful sexual-education programs being foisted upon our children by the country’s self declared social engineers…. Please, please, remember Blessed Clemens. He knew the risks of speaking out but did it anyway because there is nothing, absolutely nothing more important than the Truth of Christ.